You are here: Home > The Sherlock Holmes Journal, Summer 2019 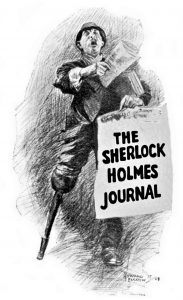 You can download the book reviews here: I Am an Omnivorous Reader (SHJ Summer 2019)

“The Moonstone and Conan Doyle: An Underestimated Influence” by Vincent Delay
The Sign of Four has echoes of The Moonstone, but the Holmes canon owes a greater debt to Wilkie Collins’s novel.

“The Adventure of the Mahratta Minister’s Sister (and Her Pig): a story for which the world is not yet prepared” by Nicholas Dunn-Meynell
A rather skewed look at that letter from Porlock.

“The Adventures of Norman Collie” by Anthony Butler
Some have claimed that Professor J Norman Collie – tall, gaunt, a mountaineer, an outstanding chemist with an acute analytical mind – was the real Sherlock Holmes.

“The Adventure of the Missing Tail” by Paul Thomas Miller
Sherlock the Pooh solves the case, with a little help from Dr Piglet.

Sherlock Holmes: The Sign of Four reviewed by Ashley Mayo and Kevin Teasdale
A cast of six in a spectacular production. Nick Lane’s play keeps close to the canon with a few embellishments, and is always faithful to the spirit.

The Hound of the Baskervilles reviewed by Roger Johnson
Thomas Moore’s play is a comic delight, with pantomime chestnuts and “Carry On” vulgarities.

“The Red-Headed Heist”
The name of this year’s Annual Dinner, held at the House of Commons on the 19th January, was inspired by an episode in Bob Neill, MP’s former career as a barrister. Mr Neill was both our Parliamentary sponsor and our Guest of Honour. The Second speaker was our Honorary Treasurer, Ashley Mayo.

“ ‘For the Game’s Own Sake’ – Lord’s Cricket Ground, Friday March 29th” by David Jones
A visit to Lord’s is a must for any cricket enthusiast, but this one had a specific purpose: to see the bat – now restored, thanks to the Society – with which Arthur Conan Doyle scored a century at Lord’s.

“It Seems to Me…” by Auberon Redfearn
Dr Redfearn envisages a really radical updating of the canon.

Der Hund von Baskerville
The last silent feature film, made in Germany in 1929, with an international cast, has been restored and released on DVD and Blu-ray. It’s worth seeking out.