You are here: Home > The curtain comes down on The Last Act 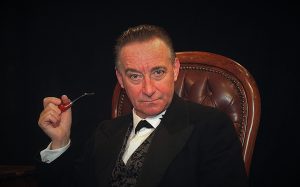 We are very sorry to have to record the death on the 17th April of Roger Llewellyn, a good friend of the Society and an outstanding actor, particularly in the character of Sherlock Holmes.

Having portrayed Inspector Lestrade to Ron Moody’s Holmes in the original production of Sherlock Holmes: The Musical (not an entirely happy experience for him) Roger took on the role of the great detective in The Hound of the Baskervilles at Newcastle-under-Lyme in 1997. David Stuart Davies was so impressed by his performance that he offered to write a Sherlock Holmes play for him. The result was Sherlock Holmes – The Last Act! in which, to paraphrase Heather Owen’s review, there was only one actor but a cast of thousands. 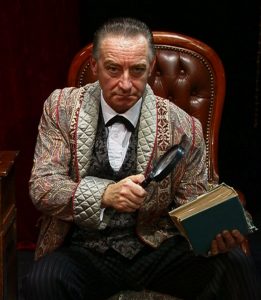 Heather continued: “Perhaps I exaggerated a little, but I wanted to convey something of the flavour of David Stuart Davies’s play and Roger Llewellyn’s performance. As well as Mr Holmes himself we met, among others, Mrs Hudson, Lestrade, Professor Moriarty, Grimesby Roylott, Captain Croker, Stanley Hopkins, Mycroft Holmes, Young Stamford, Dr Mortimer, Sir Henry Baskerville, Sherlock Holmes’s father and his twelve-year-old self. All sprang to life most vividly, in accent, gesture and expression, familiar to us of course from the Canon but given an extra dimension by this extraordinary performance.”

Directed by Gareth Armstrong and first performed at Salisbury Playhouse in May 1999, The Last Act! toured the UK, with a healthy stint at the Edinburgh Festival and another at the Cockpit Theatre in Marylebone, timed to form a part of the festivities surrounding the unveiling of the Sherlock Holmes statue at Baker Street Station, at which ceremony Roger was a very welcome guest. 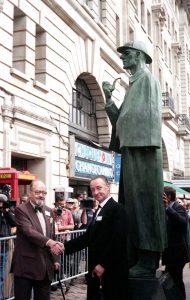 The tour was extended to the USA and Canada, continental Europe, the Middle East and the Far East. Roger Llewellyn may never match Jeremy Brett and Benedict Cumberbatch as a household name, but his reputation as a great Sherlock Holmes is assured – and Sherlock Holmes – The Last Act! is internationally recognised as a first-rate play.

Though he continued to perform The Last Act! for well over a decade, in 2008 Roger embarked on a new Holmesian venture: Sherlock Holmes – The Death and Life. This time David Stuart Davies took a different approach. 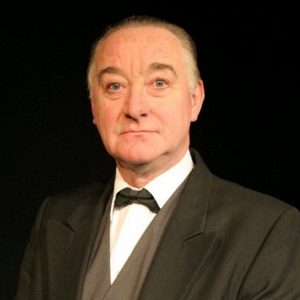 A perceptive reviewer noted that whereas the first play is effectively a powerful tragedy, redeemed by a literal shaft of warm light at the last moment, The Death and Life is a comedy about the enduring nature of the immortal sleuth. Members of the Society were able to appreciate the excellence of the play and the acting at a private performance at the Jermyn Street Theatre during the “Capital, Watson!” London weekend.

Roger was a guest at the Society’s Annual Dinner in 2009, and was touchingly star-struck on meeting another great Sherlock Holmes. Douglas Wilmer. 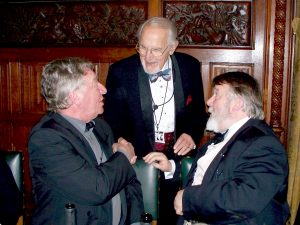 Last summer his friends were shocked and saddened to learn that he had terminal cancer. It was typical of the man that he appreciated the irony: it was lung cancer, and he was a passionate anti-smoker. (He was perhaps over-fond of alcohol, but his liver and kidneys, he told us, were in very good shape.)

Roger Llewellyn was a powerful actor with great presence and a glorious baritone voice. We can still hear that voice and enjoy his performances in Sherlock Holmes – The Last Act! and Sherlock Holmes – The Death and Life, as he recorded them for Big Finish audio in 2010, under the direction of Nicholas Briggs.

He was also a man of great charm, cheerful, generous and hospitable. He will be missed.