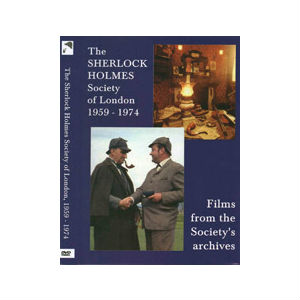 In this Diamond Jubilee year the Society’s publishing programme strikes out into new territory, with the recent release of a twin-DVD set. The digital technology that has transformed the Annual Film Evening now enables us to offer some of the more important short films from the Society’s archives – some of them unseen for twenty years or more.

There are seven films in all on the first disc.

The second disc is devoted to a truly momentous episode: the Great Swiss Pilgrimage of 1968. This was the Society’s first venture overseas, and its first event in which members were required to portray characters from the Canon – and to dress accordingly.

Our honorary member Albert Kunz, who masterminded the whole thing, introduces the programme, and Lars Ahlner, who was the youngest of the pilgrims, provides some of the commentary.

The material was compiled by Peter Horrocks and Heather Owen. Recording, editing and restoration was by Kitty Winter, Wayne Walker-Allen and Laurence Owen.

This archive film material held by The Sherlock Holmes Society of London is made available on a limited run of DVDs to Society members only and for non-commercial research and private study only.

The DVDs are in PAL format and region-free. They may be not be playable on all NTSC players. If you are confident that they will play on your NTSC system please place an order. If you would prefer an NTSC compatible version please register an interest with Robert Ellis at the addresses shown below. If there is sufficient interest the Society may be able to produce a number of NTSC versions although an extra charge may need to be made.