You are here: Home > The Return of Sherlock Holmes 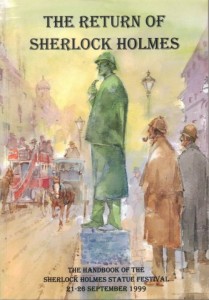 Putting up a statue of Sherlock Holmes marked a real coming of age for the Society. The long held dream of the Society to have an image of Holmes in or near Baker Street had become a reality. A six day Festival was organised and a Handbook produced.
Douglas West was specially commissioned to paint a picture for the cover. The editors pulled off two major coups by getting Prince Charles and Tony Blair to write brief foreword (Charles has been a ‘life long devotee of the great detective’ and Tony Blair not to be outdone, says that ‘The Great Detective is a great British institution’.
Not surprisingly there is a fair amount about the statue and John Doubleday’s account of his approach to creating the statue is fascinating. John also compares the impression of the image he wished to convey of Sherlock Holmes with that he attempted to achieve when recording the personality of Nelson Mandela. His articles are accompanied by many photographs recording the birth of the statue.
Richard Lancelyn Green looks back at the history of the Baker Street statue discussion, while Akane Higashiyama and Gordon MacNeill recall the statues of Holmes that already adorn Karuizawa and Edinburgh respectively. Other highlights are pieces by Bernard Davies and Roger Johnson about the Underground and the trains that ran on its rails, and an up-to-date look at Baker Street then and now from Catherine Cooke.

For our Journal Archive shipping costs are based on the quantity of journals:

For all other products, prices shown include Postage and Packaging