You are here: Home > Meet me in Bohemia 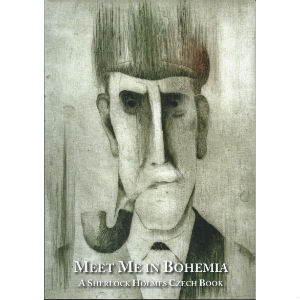 If you had ever wondered from where exactly the King  of Bohemia had travelled to visit Sherlock Holmes and from where his peculiarly strong writing paper had originated – you now have the opportunity to find out.

We cannot provide evidence that Sherlock Holmes ever visited Bohemia.  But he was certainly of assistance to the King of Bohemia and when you read this handbook you will find that a Bohemian connection entered into Holmes’ cases from time to time.

Holmesians enjoy trying to resolve inconsistencies and apparent errors in the Sherlock Holmes stories, and in explaining obscure references. Some of this scholarship is on display in these pages, along with other articles of a more general nature relating to various aspects of Bohemia.  You can find out what happened to the Hapsburgs, learn about the ‘darker side’ of rejuvenation and almost taste the superb selection of beers Bohemia has to offer.

Editor of the Sherlock Holmes Journal, Roger Johnson, says about the book “The pessimists have been saying for decades that there was nothing new that could be said about Sherlock Holmes and his world. Meet Me in Bohemia is further proof that the pessimists are wrong! A dozen eminent scholars prove that Bohemia – that lovely, mysterious, and ultimately triumphant country – plays a small but real part throughout the great detective’s career.”

The cover of the handbook is based on a drawing specially created by the highly respected Czech artist, Mr Karel Šafář, to commemorate the visit of the Society to Bohemia.