You are here: Home > “Precious volumes” – hot off the press! 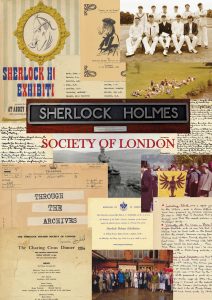 The Society is delighted to announce the publication of a new book which traces the history of The Sherlock Holmes Society of London via its ever-growing Archive at the Westminster Reference Library. With material provided to the Archive by such luminaries as Tony Howlett and Bernard Davies (amongst many others), plus Swiss trips, Charing Cross Hotel dinners (yes, there was life before the House of Commons!) and throw in a Baltic cruise: all Society life is here! For Society members old and new Through The Archives must be an essential and colourful addition to their collection; the Archive is the Society’s unique treasure and with this volume, you have a first chance to see what lies within. 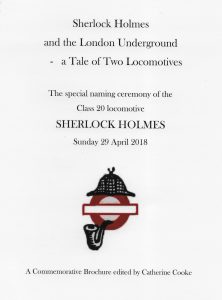 Sherlock  Holmes and the London Underground

On 29 April 2018 at the Buckinghamshire Railway Centre at Quainton Road, a Class 20 diesel locomotive in the maroon colours of London Transport was named “Sherlock Holmes” by Sir Peter Hendy, Chairman of Network Rail, and Guy Marriott, the Society’s former President. This is the second London Transport locomotive to bear the illustrious name, as an electric locomotive named “Sherlock Holmes” ran on the Metropolitan Line from 1927 until it was scrapped in 1962.  The Society produced a 24-page Commemorative Brochure for this event, edited by Catherine Cooke, under the title Sherlock Holmes and the London Underground – a Tale of Two Locomotives.

To order either (or both!) of these exciting new publications, click on “Shop” above and take it from there.