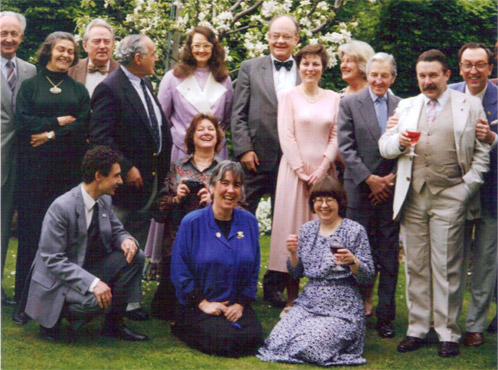 Pamela Bruxner joined The Sherlock Holmes Society of London in 1973, the year her husband – the musician and musicologist Mervyn Bruxner – died. She had met him when she was a secretary working for Kent County Council and he was the county’s School’s Director for Music. Although he was some decades older than her, there was an immediate bond and they settled in Barming, outside Maidstone. Tragically, he died within five years of their marriage.

A year after Pam joined, she took a useful step forward towards recognition at the highest Society level by writing to Sir Paul Gore-Booth – then President. She had met him at a meeting earlier in the year, when he had vouchsafed that he had lost his copy of H. W. Bell’s Baker Street Studies; Pam offered him copies of three articles from that book which she had typed out. She made a creative mark when her dramatisation of ‘The Three Students’ was performed to much acclaim during the Society’s 1988 expedition to Oxford (with the late Bernard Davies directing and appearing as Holmes).

The following year, she took over from Geoffrey Stavert as Meetings Secretary of the Society – an administrative role she embraced to the manor born and which she held until 2005. Her organisational skills were as formidable as her reports to Society Council meetings were authoritative. In 1993, she added another major string to her Sherlockian bow by editing Sunday in Sussex – the first of no fewer than nine of the Society’s handbooks she either edited or co-edited, the last being Colour it Prussian Blue in 2005. In 1993, she also hosted a memorable lunch at Barming in honour of the visit by Tom and Dorothy Stix (Tom was at the time ‘Wiggins’ of the Baker Street Irregulars). A delightful photograph of the event is reproduced in the Diamond Jubilee Supplement, published at the end of last year. Pam was also an enthusiastic Swiss Tripper.

She was invested as a Baker Street Irregular in 1998, with the title ‘The British Government’ and made an Honorary Member of the Society in 2003. In 2006, she was the recipient of our Tony Howlett Award and was Guest of Honour at the Society’s first outing to the races at Kempton Park in 2010.

As well as her successes in the field of Sherlock Holmes, Pam was involved with the Jane Austen and Dorothy L. Sayers Societies and was preparing the latest edition of the publication of the Margery Allingham Society a week before she passed away.

It was with the greatest pleasure to me that she agreed to write the Foreword to Volume Two of The Best of ‘The Sherlock Holmes Journal’ (SHSL 2011), which turned out to be her last written contribution to our scholarship. Although Pam had been suffering with health problems, she was in excellent form at the Society’s Diamond Jubilee Dinner at the House of Lords last summer.

In their later years, Pam and Geoffrey Stavert were inseparable companions, which gave great pleasure to their wide circle of friends. After Geoffrey’s death in 2002, Pam moved to Winchelsea and immersed herself in local artistic and musical societies. As an Associate Member of Glyndebourne, Shirley Purves tells me, ‘she was hostess there every year for groups of friends – a sought-after invitation as long as you were ready to help prepare a quite elaborate spread and carry chairs and tables to the appointed spot in the gardens!’