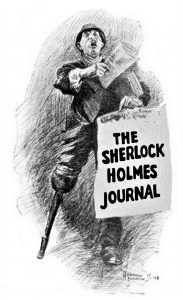 You can download the book reviews here: I Am an Omnivorous Reader (SHJ Winter 2017)

Editorial: “Bring Me the Books, Bill“
Long ago some experts declared that everything that could be written about Sherlock Holmes had already been written. How wrong they were!.

Editorial Notes
A blue plaque has been installed at Arthur Conan Doyle’s former lodgings in Plymouth. Robert Graham reports from the unveiling.
Sherlockon Polska, the first Sherlock Holmes convention in Warsaw, was a resounding success!
Sherlock Hams was one of the Haslemere Hogs, and the Moor Otters included Elementary, My Dear Otter – all for charity.
The Sherlock Museum in Meiringen has a new Curator, Stefan Meier. (The Society is a Patron of the Museum.)

“Did Mahatma Gandhi and Sherlock Holmes Ever Meet?” by G Ram Mohan
It seems likely that during one of Holmes’s odder cases he encountered the young lawyer who would become the Father of India.

“The Etymology of View-Halloa” by William S Dorn
“View-Halloa” or “View Halloo” – the phrase is familiar, but what does it mean in the context of the Holmes canon?.

“Reade – Holmes” by Bruce Harris
Holmes recommended The Martyrdom of Man, but was he right about the predictability of human behaviour?

“Anais Violette Holmes” by Nick Dunn-Meynell
Apparently Holmes was not descended from the Vernets after all, but from another great French painter.

Sherlock Holmes and the Crimson Cobbles reviewed by Ashley Mayo
Toby Hulse’s clever, fantastic and very funny play toured in the Autumn. Our Hon. Treasurer went to see it in Winchester.

“A Capital Return” – The London Mini-Festival Weekend, 25-29 May 2017
The weekend began with afternoon tea at the House of Lords on Thursday, kindly sponsored by Lord Horam.
After the formalities of the Annual General Meeting of Friday, Nick Utechin asked the questions at a Pub-style Quiz, which was further enlivened by Mike Miller’s funny, punny Sherlockian Crossword Clues.
On Saturday, courtesy of ThisBus, members and guests enjoyed a tour of Holmes’s West End in a vintage Routemaster bus, with a commentary by Dr Watson himself.
The rest of the long weekend was devoted to Art. Sunday’s guided tour of the Wallace Collection, home of an impressive collection of paintings by Horace Vernet, was followed on Bank Holiday Monday by visits to the Kensington homes of two great Victorian artists: Edward Linley Sambourne and Lord Leighton.

“As Singular a Countryside as Any in England” – Exploring the Norfolk Cases, 22-24 September 2017 by Roger Johnson
In 1984 we went to Norfolk to investigate the cases of “The Gloria Scott” and “The Dancing Men”. Thirty-three years later we returned, based as before in Norwich.
Saturday was “Dancing Men” day. From North Walsham, the nearest station to Ridling Thorpe Manor, we went via Ebridge Mill (surely the inspiration for “Elrige’s Farm”) to Honing Hall, where we were welcomed by Sir William and Lady Cubitt. The Cubitts, and the Colliers of Walcott House, joined us for lunch at the Royal Cromer Golf Club, where conversations between Conan Doyle and Fletcher Robinson sowed the seed of The Hound of the Baskervilles.
Next, Mr & Mrs Collier entertained us at Walcott House, identified in 1963 by Shirley Purves as the real Ridling Thorpe Manor. Our last call was at the Hill House at Happisburgh, where Conan Doyle met another branch of the Cubitt family and discovered the figures that inspired the “dancing men”.
At dinner back in Norwich, our Guest of Honour was Captain David Bray, who told us about the Gloria Scott, what kind of ship she was and what life on board was like.
Sunday took us to the country of the Broads in search of the real Donnithorpe. Whether or not we found it, we spent a charming hour or two by Horsey Mere before returning to our hotel for lunch.

“Hilton Cubitt: The Adventure of the Dancing Men” by Major-General Sir William Cubitt
After lunch at the Royal Cromer Golf Club, Sir William told us about his family and identified a likely inspiration for the tragic Hilton Cubitt. This is the text of his talk.

“Come at Once if Convenient” – The Launch of Neil McCaw’s Facsimile Edition of “The Creeping Man” by Margaret Bird
The handsome facsimile, edited by Professor McCaw and published by the University of Winchester, was launched on the 10th July at Portsmouth City Museum, where the original manuscript is one of the many wonderful items in the Conan Doyle Collection, bequeathed by the late Richard Lancelyn Green.

The Victorian Cricket Match, 2017
On the 18th June, a scorching day, our team once again faced the Gentlemen of the PG Wodehouse Society in the annual match at West Wycombe. The result was a draw, and the Society’s two-up series lead still stands.

“It Seems to Me…” by Auberon Redfearn
The prominence of “fake news” raises uncomfortable questions about the reliability of Dr Watson’s accounts.