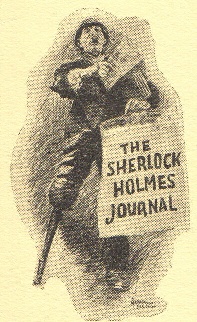 The most recent issue, Summer 2013, contains the following articles, as well as the usual reviews and letters:

EDITORIAL: “YOU HAVEN’T SEE ABOUT BAKER STREET, THEN?”

Our member, the distinguished illustrator Ron Tiner, is preparing a new edition of A Study in Scarlet, but contemporary photographs of one vital section of Baker Street are proving elusive.

We salute the longest-serving members of our Society.

Our member Ken Ross has made his video recordings of the Society’s activities accessible on YouTube.

We learn about Tommy Walls, the photographer who took the classic pictures of Carleton Hobbs and Norman Shelley in the 221B sitting-room at the Sherlock Holmes pub.

Jack Thorne, who, more than anyone else, was responsible for reconstructing Holmes and Watson’s sitting-room, is honoured with a brass plaque.

In July 1922 Eille Norwood made his first public appearance at a cinema: the Regent Theatre in Chelmsford, where one of his Sherlock Holmes films was showing.

The Society has performed two plays by the well-known American dramatist Jerome Coopersmith. In 1966 he had a couple of unexpected encounters in Baker Street.

We mourn the loss of Arthur M Axelrad, author (as Arthur M Alexander) of a superb guide to Holmes’s London, Hot on the Scent; of our American member and long-time friend Theodore G Schulz, BSI; and of Patrick Garland, who directed the original production of Jeremy Paul’s play The Secret of Sherlock Holmes.

JUST SHERLOCK: A STORY OF THE YOUNG HOLMES by S Subramanian

Might the detective’s future have been influenced by a childhood adventure that involved two very different mathematical geniuses?

IT SEEMS TO ME… by Auberon Redfearn

Holmes up to date – and Politically Correct.

THE MOST DANGEROUS CROOK IN “CHICAGO” by Sonia Fetherston

Abe Slaney came from Chicago Colony in Arizona, a notorious hide-out for law-breakers in the 1890s.

SHERLOCK HOLMES AND THE DRUCE-PORTLAND CASE by Jackie Speel

The notorious Druce-Portland Case – in fact a sequence of legal cases and other activities – went on intermittently for more than a decade. Holmes must surely have taken an interest, as the case centred partly upon the Baker Street Bazaar, just along the road from 221B.

“A MANUFACTORY OF ARTIFICIAL KNEECAPS” by Sarah Obermuller-Bennett

Such places did exist, and their products were widely used – but not on human beings.

THE MYSTERY OF MANCHESTER SQUARE by Anon

The true author of An Englishman in Paris was also a collector of Vernet’s paintings.

THE REVENGE OF SHERLOCK HOLMES reviewed by Roger Johnson

At another excellent Annual Dinner, our Guest of Honour, Kim Newman, explained how Moriarty could live on, despite his apparent death at the Reichenbach Falls. Mr Newman’s address was followed by an equally witty one from our Treasurer, Calvert Markham, who revealed that in his spare time John H Watson was a fine jazz pianist.

“A THIRD CLASS CARRIAGE ON THE UNDERGROUND” by Heather Owen

2013 is the sesquicentenary of the London Underground, so in March the Society visited the London Transport Museum. 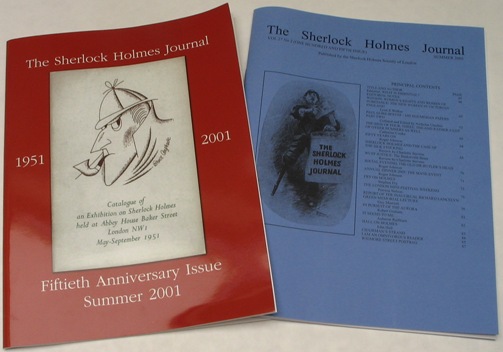