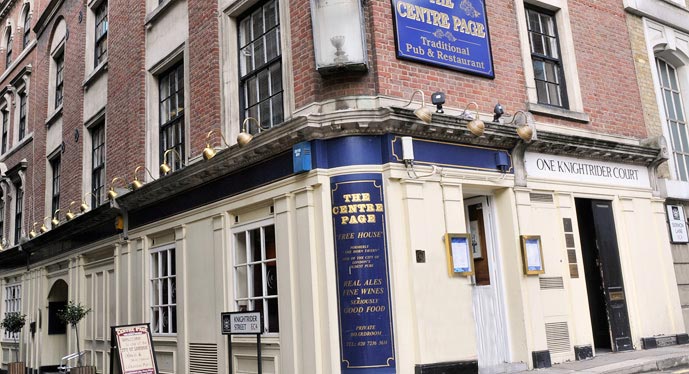 The Sherlock Holmes Society of London’s Morning After will be held at The Centre Page, 29-33 Knightrider Street London EC4V 5BH on Sunday 10th January, from 11.30 am, where we have sole use of the downstairs room for our informal function.   Knightrider Street is on the right as you walk down Peter's Hill from St Paul's towards the Millennium Bridge; the pub is on the corner.  The original building of 1665 was The Horn Coffee House in Doctors Commons, 10 Godliman Street, off Carter Lane on the south side of St Paul’s Churchyard.  The Horn Tavern, as the late 18th century pub was known, is best known as being mentioned in Charles Dickens’ The Pickwick Papers – Mr Pickwick sent his friends to the tavern to fetch a bottle of wine for his supper, he being incarcerated in the Fleet Prison at the time.  It was fairly recently restored and renamed The Centre Page.  (While Holmes did visit Doctors’ Commons in “The Speckled Band”, it was sadly to Somerset House that he went, the building housing it here having been demolished in 1867).

Drinks will be available on a cash basis and lunch will be served at 1.00 p.m.  As usual, there will be a choice of a Traditional Roast with all the Trimmings or a Vegetarian option followed by a choice of dessert; after lunch Tea or Coffee are included in the price.  The cost will be £17.50 / $35 per head.  Choices must be notified in advance and details will be circulated to those who book for the Morning After closer to the time.  An application form is appended and you may include the appropriate payment on your Dinner cheque if you wish.

Members planning to spend the day in the area might like to know that there is a sung Eucharist at St. Paul’s Cathedral at 11.30am on Sunday mornings and Evensong at 3.15pm.  The Tate Modern (open until 6pm) and The Globe Theatre Exhibition (open until 5pm) are a short walk away on the south side of the Thames.  The Museum of London, whose current exhibition is The Crime Museum Uncovered, is a short walk away to the north.  For the first time ever – never-before-seen objects from the Metropolitan Police’s Crime Museum are on public display in a major new exhibition – See more at: