You are here: Home > Events > “The Case of the Hung Parliament” 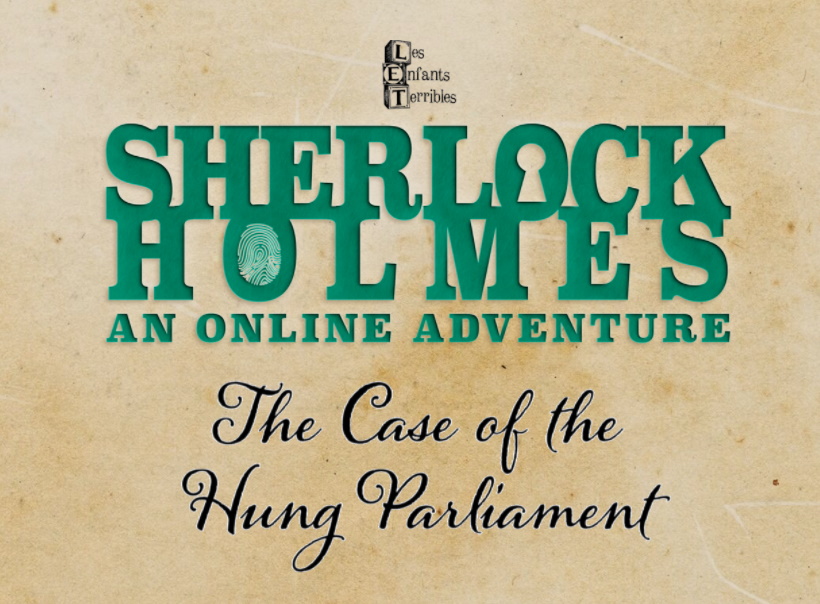 Ok, so if you’re all ready, we should get on.
This isn’t a game we’re playing here – there’s a crime to be solved. So listen up!

The Home Secretary, the Foreign Secretary, and the Lord Chamberlain have all been found hanging, in their own chambers. Each victim died on their birthday, and on that day had received a card with a mysterious quote written in it.
But what does this mean?
Where’s Sherlock?
And what will you do next with 75 minutes left to solve the case before the murderer strikes again?

Using their unique experience of creating innovative live immersive shows the company adapts to bring an online whodunnit, including live performance, immersive 360 degree technology, and over 100 clues to discover!

Don the deerstalker and become Baker Street’s finest detective. Travel back to Victorian London and delve into the world of Sherlock Holmes, using your powers of deduction to solve the case before time runs out.

Loosely inspired by 2016’s live show “The Games’ Afoot”, Les Enfants Terribles are collaborating with pioneering video company LIVR to present an experience that pushes the boundaries and blurs the lines between theatre, gaming, escape room and board game. A perfect family adventure encapsulating the fun, innovation and enjoyment Les Enfants Terribles have become synonymous with.

Tickets are just £15* per player (based on a group of six people).
Don’t miss out – book today!
https://www.sherlockimmersive.com/?utm_source=WhatsOnStage&utm_medium=Email&utm_campaign=WhatsOnStage%20jan%20extension

“Nobody makes immersive theatre like Les Enfants Terribles!”
— The Stage

“A Study in Sherlock” – online event