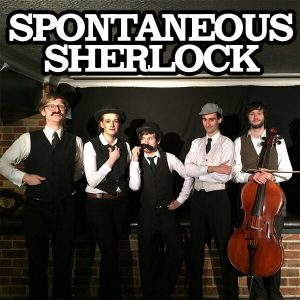 A huge success at the Edinburgh Festival Fringe, Spontaneous Sherlock is an entirely improvised Sherlock Holmes comedy play, based on the title suggestions of the audience.  It’s performed  by four of the country’s most critically-acclaimed comedy improvisers,  with live Victorian musical accompaniment.

Their show will play on Saturday the 22nd of October at 9:30PM at Blue Orange Theatre, 118 Great Hampton Street, Birmingham B18 6AD.

They are also running a workshop on Sunday the 23rd of October from 10AM-12 Noon, also at Blue Orange Theatre.

Other attractions at the Birmingham Improv Festival include: