You are here: Home > Events > Sherlock Holmes Saves The Nation! 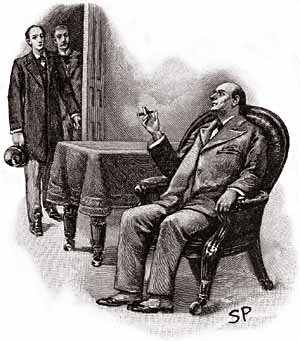 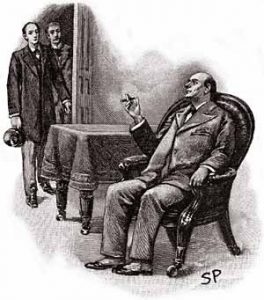 A virtual tour of the world of the Diogenes Club in Westminster and St James’s.

Illustrious Clients. Greek Interpreters. Naval Treaties. Prime Ministers, secret agents and ‘a certain gracious Lady’.  As Conan Doyle joined various London clubs, dabbled in politics and became a famous public figure, so he placed Holmes and Watson among the great and the good, discovering that crime is equally prevalent in High Society.

This virtual tour explores that world.  The St James’s Club where Holmes went to consult the mysterious Langdale Pike.  Holmes’ clever brother Mycroft, who sometimes ‘was’ the British government.  Mycroft’s lodgings in Pall Mall and the model for the Diogenes Club. The library where Dr. Watson did vital research to trap a devious murderer. The ‘little door’ where the Kaiser’s masterspy Von Bork went to deliver his secret codes (until Sherlock stopped him).  The original Scotland Yard.  Hidden Holmes film and TV locations featuring Jeremy Brett, Christopher Plummer and Robert Downey Jr.  The theatre where a great stage Holmes was reunited with his most formidable opponent, and the place where a young Basil Rathbone won an early contest with a future Moriarty.  Follow the trail of Holmes and Watson in pursuit of missing submarine plans, mysterious ladies and devious politicians…

We are again fortunate in having Richard Burnip as our guide for this walk.  Richard is an actor who took a degree in English and specialized in early detective fiction.  He has narrated over 140 audiobooks including Robert Ryan’s quartet of Dr Watson novels beginning with Dead Man’s Land and has also played Watson on stage.  He wrote the chapter on the Granada Sherlock Holmes series for The Complete Film and TV Sherlock Holmes and has written on Holmes films for the Journal of Popular Film and Television.  Richard has contributed to The Sherlock Holmes Journal and received the Tony and Freda Howlett Literary Award in 2015 for his article “All London Shivered”, concerning the original London production of Doyle’s play The Speckled Band.   He has lectured on Conan Doyle in a variety of locations including the Museum of London and the National Army Museum.

Under the General Data Protection Regulation (GDPR) the Society does not share members’ data with a third party. Should you wish to attend this Virtual Walk then your e-mail address will need to be shared with Richard so that he can set up the event. Richard will not maintain any of your data after the event.  Richard will send the Zoom invitations on Friday 14th, and a 2-hour reminder on the day itself.

Numbers are limited to 40 per walk.