You are here: Home > Events > ‘Paddington’ Pollaky – an inspiration for Sherlock Holmes? 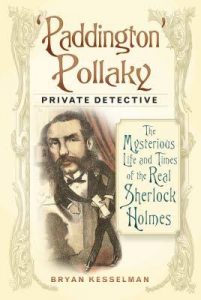 Bryan Kesselman will be talking about his biography of Victorian private detective Ignatius Pollaky on Saturday 11th February at 5pm at Marylebone Library.

Kesselman, who is a composer and musician as well as a writer, will tell his audience more about ‘Paddington’ Pollaky, Private Detective, The Mysterious Life and Times of the Real Sherlock Holmes.

Who was the Victorian super-sleuth ‘Paddington’ Pollaky? Newspaper accounts detail his work as a private detective in London, his association with The London Society for the Protection of Young Females, his foiling of those involved in sex trafficking, and his tracking down of abducted children.

What was his involvement in the American Civil War? Why did he place cryptic messages in the agony column of The Times? And why were the newspapers so interested in this Hungarian detective and adventurer while the police thoroughly disapproved of him?

Was it Pollaky who provided the inspiration for great literary creations Hercule Poirot and Sherlock Holmes? Come to Bryan’s talk and find out for yourself!

(Bryan Kesselman's book received a glowing review in the Summer 2015 issue of The Sherlock Holmes Journal.)