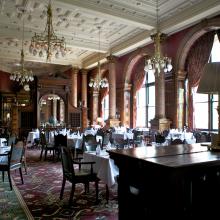 The Society’s AGM will be held at The National Liberal Club at 1, Whitehall Place, London, SW1, at 6.00 for 6.45pm. The National Liberal Club is located on the corner of Whitehall Place and the Victoria Embankment, not far from Embankment Underground Station, and also conveniently placed for Charing Cross main line station. It is usually possible to find a parking space in the vicinity at this time in the evening – although you may have to pay the congestion charge. http://www.savageclub.com/

Members and their guests may opt to attend the meeting only at no charge, or to dine beforehand at a cost of £46.00 per head. This includes VAT and service but not drinks, which must be paid for on the day. For those who choose to dine, the meal will comprise Beef, Mushroom and Ale Pie followed by Raspberry Ripple Parfait with Vanilla Anglaise, Coffee and Mints. A vegetarian or fish alternative main course may be ordered in advance – please specify if you want this on the application form.

A cash bar will be open either in the Savage Club Room on the ground floor or in the Smoking Room on the first floor from 6.00pm. After the meeting, members may use the National Liberal Club bar. Dinner will be served promptly at 6.45pm in the David Lloyd

George Room on the first floor and will be followed by the AGM, from around 8pm. We anticipate that the meeting will finish around 9.45pm, though many members stay on to chat.

After the formal business of the evening we present:-

The Game’s Afoot is David Stuart Davies’ one man show on Sir Arthur Conan Doyle and Sherlock Holmes. David is a longstanding member of the Sherlock Holmes Society of London and for ten years presented the Society’s Film Evening, He was a co-founder of The Northern Musgraves and is also a Scandalous Bohemian. He is the author of seventeen novels, numerous non-fiction works and plays and is a film historian. David is a member of The Detection Club. He has served on the national committee of the Crime Writers’ Association and has edited Red Herrings, their monthly publication, since 1999. In The Game’s Afoot, David will present in a theatrical fashion the parallel careers of Arthur Conan Doyle and his magical creation Sherlock Holmes. We travel from Edinburgh of Doyle’s birth to Southsea, where Holmes was created, and beyond. With dramatised extracts from the stories and from Doyle’s life, the show gives an overview of these two iconic individuals. Other characters who appear include Joseph Bell, Oscar Wilde and a certain Cornish fisherman! While dyed in the wool Sherlockians are unlikely to learn anything new, they should enjoy and be amused by this concise and entertaining presentation of the twin biographies.

* There is no charge for attending just the AGM and meeting