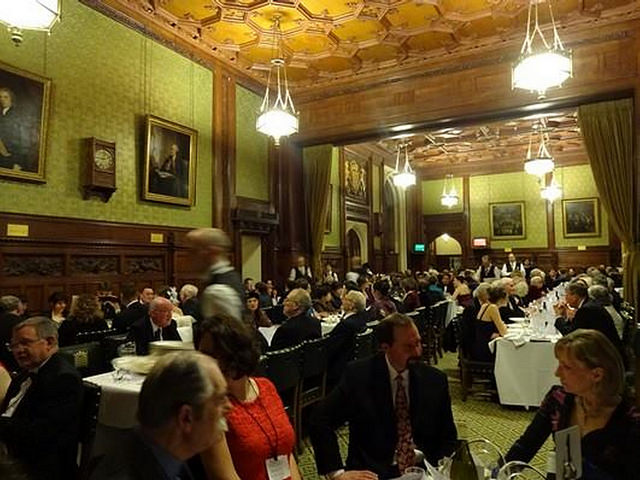 [In the Members’ Dining Room (photo by Katri Leikola)]

The Society's sixty-third Annual Dinner will be held in the Members' Dining Room at the House of Commons, London, on Saturday 9th January 2016, at 6.30 for 7.30 pm.  The title assigned to this year's function is THE BERYL CORONATION.  We are much indebted to Jo Johnson, who makes a welcome return as our sponsor as a sitting Member of Parliament, a requirement for all functions held in this unique venue. We look forward to welcoming both him and all or most of our Honorary Members, as well as members of the Society from all over the world.

Our Special Guest this year is Beryl Vertue OBE and our Speaker Sue Vertue.

Beryl Vertue is one of Britain’s most respected Producers.  She began her career as an agent for the likes of Spike Milligan, Eric Sykes and Frankie Howerd.  In the 1960s she formed Associated London Films, where she was Associate Producer on The Spy With A Cold Nose, Executive Producer on the silent comedy The Plank starring Eric Sykes and Tommy Cooper.  Feature film versions of televisions shows such as Till Death Us Do Part and Up Pompeii followed with other films. In 1967 she joined Robert Stigwood's company as Deputy Chairman and pioneered the concept of selling television formats to Europe and America, resulting in the USA in All In The Family, based on Till Death Us Do Part, and Sanford And Son based on Steptoe And Son.  She went on to produce Movies of the Week for all three American networks, including the first television roles for both Jack Lemmon and Kirk Douglas.  She was Executive Producer of the film Tommy.  Beryl left in the 1980s to form her own independent production company Hartswood Films. Producing drama, light entertainment and documentary films, Hartswood prides itself on being truly independent, providing programmes for all networks.  She is Executive Producer for Sherlock.  Beryl was made a member of the Royal Television Society Hall of Fame in 1999 and the same year was honoured by Women in Film and Television for Outstanding Contributions to the Industry.   She received an OBE in the 2000 New Year’s Honours List for Services to Independent Television Production.  Other awards followed, including in 2010, together with daughters Debbie and Sue, the Women in Film & TV Achievement of the Year Award for Sherlock.

Sue Vertue began her producing career at Tiger Aspect in 1991 with Mr. Bean, and went on to produce among other shows the Emmy Award-winner The Vicar Of Dibley.  Having an idea for a flat share between a gay man and a straight girl, she created Gimme, Gimme, Gimme, which was frequently top of the BBC Two ratings and subsequently moved to BBC One.  She left Tiger Aspect in 1998 to join the production team for Comic Relief 1999 for the BBC.  After a few months’ maternity leave, she joined Hartswood Films, where she produced four series of Coupling, created and written by her husband Steven Moffat.  While producing several other comedies, Sue Vertue is perhaps best-known for Sherlock.  She served as a producer for the first five chronological episodes, and was promoted to Executive Producer for the final episode of series two – The Reichenbach Fall.

Most members will know that the seating capacity of the Members' Dining Room is limited to 170 and that this means it is only possible for them to invite one guest each. If the Dinner is oversubscribed a ballot will be held immediately after the closing date for applications, which is Friday 27th November.  Security at the House of Commons is necessarily strict, and admission will be by formal invitation only: for this reason we need to know the full name of your guest if you are bringing one.  Successful applicants will receive personalised invitation cards which will have to be produced to the police on the night in order to gain entrance to the building, and as these will perforce be despatched during the Christmas postal rush please do not worry unduly if yours does not arrive until after the holiday.  If you expect to be away at that time please give an address to which mail should be sent to ensure safe receipt.

A vegetarian alternatives will be available if ordered in advance, and special dietary requirements can also be catered for provided sufficient notice is given.  Space is provided on the application form for you to state your requirements. It is likely that the Vegetarian main course will be Roasted root vegetable and stilton parcel, winter greens and herb sauce.

The charge for the evening will be £80.00/US$160.00 per head, inclusive of everything except drinks which must be paid for individually on the night.  Copies of the House of Commons wine and bar lists will be sent to all successful applicants so that they can order in advance: we have found that this gives everyone more time to mingle with friends in the bar beforehand – although you will be able to place an order on the night if you prefer.

Smoking is not permitted in any rooms, including the pre-prandial bar and the Dining Room.