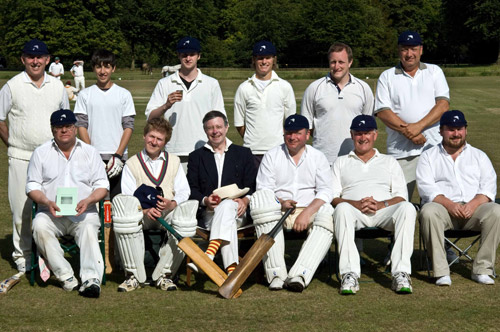 For those members unable to come to the idyllic cricket ground at West Wycombe in Buckinghamshire, it is impossible truly to relay the sights and sounds of a perfect day. But these words will have to do. The Society went into this fixture at 2-all in victories; there had also been 4 draws (mathematicians will work out that there was one match missing: yes, we were rained out in 2007).

A reasonable crowd – mostly from our Society – had gathered by 11.30, out team having been on site an hour earlier for loosening up, a touch of badinage and reminders to some of us how we had won last year. Our captain, Peter Horrocks, provided the now-traditional stirrup cup of fine malt fluid with minutes to go to the start of the match, and I read out a stirring message from our president, Guy Marriott:

‘I am sorry not to be with you here today, but Liz and I are on important investigations in the Alps exploring the Canonical connections of the Splugen Pass. The Society’s team has shown great success in the past…and I am sure that on the occasion of this important anniversary match, you will demonstrate your strengths at bat, and at bowling and in the field. Good Luck!’

David Jones, who was hurled into umpiring duties last year, was present but not called upon, as the venerable Murray Hedgcock and Lt. Col. Norman Murphy of the Wodehousians were present and correct.

The Gold Bats batted first as tradition demands, and they started superbly, moving seamless to 168-4 by lunch (for the purists among us, this number of wickets includes that of their opener, Oliver Wise, who made a brilliant contribution of 59 before retiring). The ball had started to disintegrate, and despite the fact that two steepling catches were taken in the deep, the Society felt under threat.

During the lunch interval, as bottles were uncorked and fine comestibles consumed, I launched the commemorative brochure Wycombe Wonders – prepared for this anniversary and published by the Society (Order your copy now). Free copies were distributed to members of the two teams, the umpires and anyone else who wanted them on the day. I wrote it, Peter Horrocks provided the Foreword and Bob Ellis produced it. It is a matter of great satisfaction to learn that a copy will be placed in the library of the M.C.C. at Lords. Wycombe Wonders is published in an unnumbered edition of 221B and 100 copies are available for sale (more details to follow).

In 2009, I gave our Etonian member George Gross a glass of reasonable white Burgundy at lunch, and he proceeded to rip through the Gold Bats. This year, I made sure he partook again (he had already taken one wicket before the break). He took another three fairly quickly (each rather spookily predicted to the very balls by my wife Annie!). It should also be recorded that our wicket keeper of many matches, Andrew Levinson, this year handed his gloves over to his son Ben (who diligent followers of this fixture may remember partnered my son James in a nail biting draw in 2006). At one point, incidentally, we had a Wodehouse batting pair of Julian Hill and his son Archie while Levinson Sr. bowled to his keeper son!

Readers: the Gold Bats declared on 212-7 not long after lunch.

The Society, as red kites swooped and wartime planes droned across an almost cloudless sky, began its response. 9-1, then 28-2 (both, er, interesting lbw decisions). Mr. Gross came to the wicket and things started happening – including, importantly, a 54-run partnership with newcomer Ian Beardsworthy. At tea, we were 85-3, with much still to do.

Vitally, during the interval Andrew Levinson proposed that the normal game-end time of 6 pm be extended by half-an-hour – in the light of the time the Gold bats had occupied the crease before declaring. The umpires agreed.

Mr. Gross reached his half-century. Ben Levinson joined him at the crease. A few minutes later his father began a long walk around the boundary, so nervous was he. He should not have been: Ben stayed with George for ages, scoring 19 vital runs. It has to be said that the Bats dropped two important catches. These two sterling batsmen shared a partnership of 68. We crept closer, but there were plenty of moments of sweaty worry among the senior members of our team.

Cut to the chase. I shall record that my son James substituted for me batting – running in to the wicket as the clock ticked – and scored 3; more importantly Duncan Pallett smote some lusty blows at a vital time. George Gross was still there, playing quite immaculately. I heard afterwards that some Wodehousians thought that Gross should have been retired, but it should be pointed out that the situation was entirely different to Mr. Wise’s retirement earlier in the day.

The Sherlock Holmes Society of London beat the Gold Bats of the P. G. Wodehouse Society by 2 wickets, with 4 minutes to spare. George Gross ended not out on 114, the highest score by anyone on either side in the nine matches played. 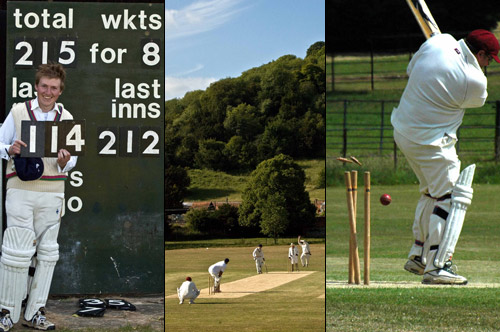