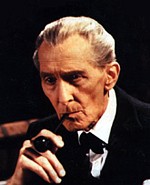 Peter Cushing had a long and distinguished career as a stage and film actor, perhaps best remembered for his partnership with Christopher Lee in Hammer Studios long-ru1958nning Dracula series. His first appearance as Sherlock Holmes was part of a planned series of Holmes films from Hammer Studios. 1959's The Hound of the Baskervilles was the first Sherlock Holmes film in colour. Although Hammer never did get a series under way, Cushing did portray Sherlock Holmes many more times for television, including yet another remake of The Hound of the Baskervilles.

A 16-part Sherlock Holmes television series was made in 1968 and 1969, including The Hound of the Baskervilles (2-part episode, July 7 and 14, 1968). It got Cushing's name as associated with the role as he was with Frankenstein and Van Helsing. Cushing was a replacement for Douglas Wilmer, who had starred in 13 episodes in 1964 and 1965:

"…[Later] I asked him how he had enjoyed doing the Holmes series. He replied tersely to the effect that he would rather sweep Paddington Station for a living than go through the experience again. He had my sympathies!" – Douglas Wilmer, Cushing's predecessor in the series.

“I was kept busy for the next nine months, making a series of 15 Sherlock Holmes adventures with the excellent and humorous Nigel Stock playing Dr. Watson. It proved a popular program, but I was most displeased with my performances. Helen’s condition was a constant worry, diverting my concentration, and of course, I missed her presence in the control box, which gave me self-confidence I lacked. She was also my sternest critic, and I felt lost without her guidance. Adding to my anxieties, the BBC’s schedule went a little haywire. The original plan had been ten days’ rehearsal, plus recording, for each installment, including location shooting. Unfortunately, our British climate had not been taken into account, and rain often “stopped play”, losing us valuable hours while we waited for it to stop and leaving little time for the interiors. The series began transmission before we’d completed the full complement, so we were pressured into getting them ready to keep up with the weekly demand. I can never give my best under such conditions, and to my mind, it was apparent on the screen.” – Peter Cushing

The television film directed by Roy Ward Baker, The Masks of Death was Cushing's final appearance as Holmes. Cushing played Holmes as an aging, retired gentleman aided by John Mills as Watson. A sequel, The Abbott's Cry, was planned but cancelled due to Cushing's ailing health. His final association with Sherlockians was a lapel pin he designed for a Society in 1987.

"…Not the pleasantest of characters….It's a very difficult part to play…he goes up and down like a yo-yo. You've got to be awfully careful when you play a part like that that it doesn't become annoying to the audience."– Peter Cushing.