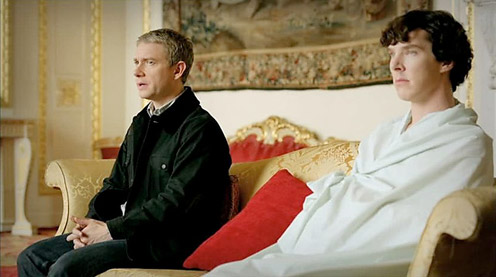 On Sunday 1st January 2012 Sherlock Holmes and Dr John Watson return to the BBC in Series Two of Steven Moffat and Mark Gatiss’s contemporary take on Conan Doyle’s most iconic adventures.After the huge success and popularity of the first series – and following hot on the heels of the Guy Ritchie sequel – the Society relishes the return of Benedict Cumberbatch and Martin Freeman to our screens.The first episode is entitled ‘A Scandal in Belgravia’ and we’ll be expecting more than a few references to the Canonical tale from which it is derived including the involvement of the women, Irene Adler.The Sherlock Holmes Society of London is always intrigued by new material featuring our favourite characters and as series co-creator Steven Moffat is our guest speaker at our forthcoming annual dinner we are more than usually excited.If you’re interested in finding out more about Sherlock Holmes then please take the time to have a look around the website where you’ll find out more about the world of Sherlock Holmes and the Sherlock Holmes Society of London.And if you decide you’d like to join the society then you can do so online or if you’d like to know more then please don’t hesitate to get in touch. We’re always keen to hear from those interested in the world of Sherlock HolmesAnd we’d also love you to join our Facebook Group Facebook.

A Scandal in Belgravia Trailer