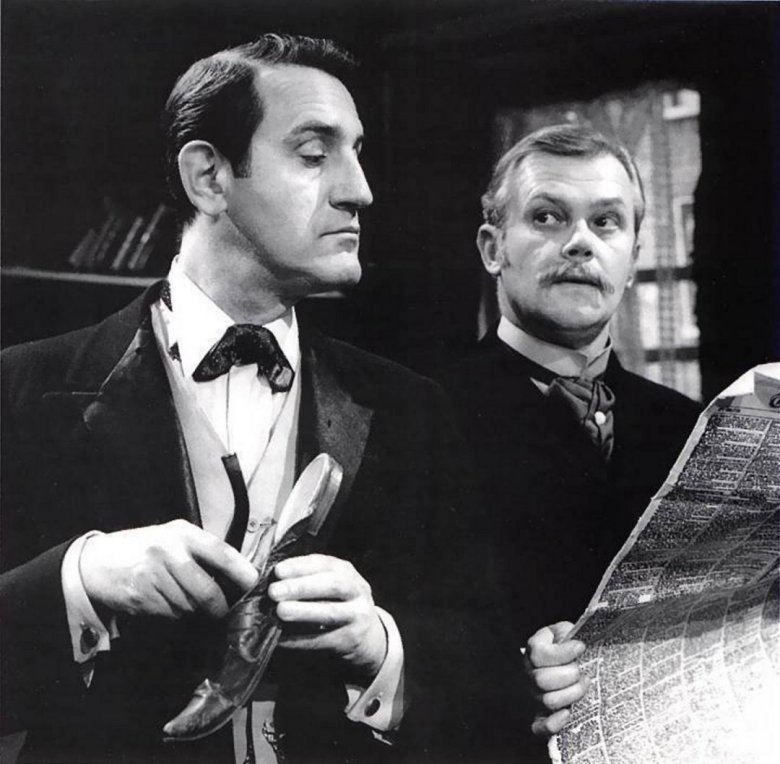 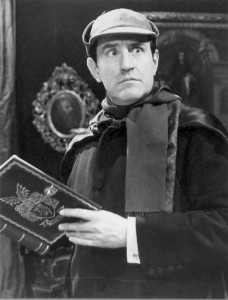 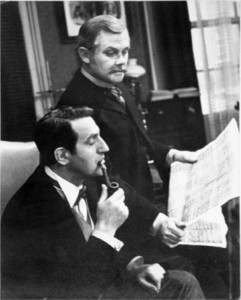 It is with great sadness that we report the death of our Honorary Member Douglas Wilmer. He passed away early in the morning of Thursday 31st March in Ipswich Hospital after a short illness.

For many, he was the seminal television Sherlock Holmes, appearing in 13 dramatisations on the BBC in 1964-5 with Nigel Stock as his Dr. Watson. Although it was not a professional experience he much enjoyed – some scripts were not up to par and rehearsal time was at a premium – Douglas’s portrayal was masterful: incisive, drily witty, utterly in command of events, he looked and sounded exactly as Sherlock Holmes should look and sound. For many years, he was almost the ‘forgotten’ Holmes, as Jeremy Brett strode imperiously and flaringly on our screens. But it was marvellous that last year the BFI brought out a serious boxed DVD set of the series, with many extras and a booklet with contributions by Elaine and Jonathan McCafferty, Roger Johnson and me. If you don’t already own it, buy it. 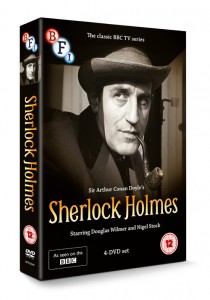 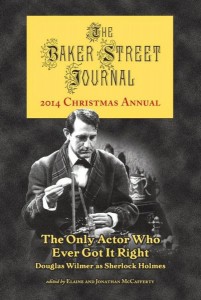 Elaine and Jonathan had already edited an excellent 2014 Christmas Annual for The Baker Street Journal about Douglas – and it was a delight for a few members to accompany him on an almost ‘royal’ progress around the Museum of London’s Sherlock Holmes Exhibition last February. In 2009, his memoirs, Stage Whispers (published by Philip Porter under his imprint Porter Press International), was launched at the National Liberal Club. In 2012, Mark Gatiss presented him with a memorable few cameo moments as an outraged member of the Diogenes Club in an episode of Sherlock (‘The Reichenbach Fall’). 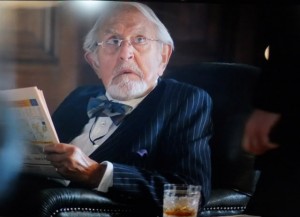 In 1991, the Society bestowed Honorary Membership on Douglas, and the following year, he was Guest of Honour at our Annual Dinner. In 2000, he was also invested as a Baker Street Irregular (‘The Lyceum Theatre’). Other Holmesian achievements were appearing as Sherlock in Gene Wilder’s otherwise rather forgettable 1975 film The Adventure of Sherlock Holmes’s Smarter Brother and a masterly series of readings of Canonical stories on cassette (at first in a limited release and then for Penguin – produced by Philip Porter and Richard Lancelyn Green). 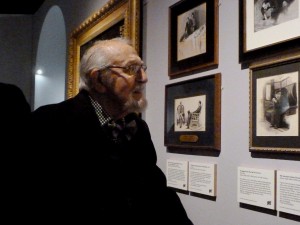 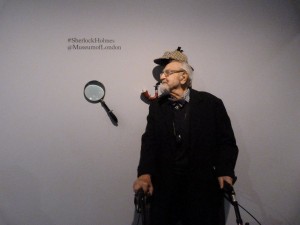 Douglas Wilmer trained at RADA and then immediately went off to war in the Royal Artillery, serving in North Africa. He debuted on the London stage in 1945 in mostly classical roles, and broke through into films in the early 1960s – playing with great panache in El Cid, Jason and the Argonauts, Cleopatra and Khartoum among many other big screen epics. Later, he was an admirable Nayland Smith in two Fu Manchu films.

Douglas and his wife Anne regularly holidayed on her home island of Malta, and it was there that he developed his largely self-taught brilliance as a watercolour artist. As a celebration of his 90th birthday, a patron of his works produced a wonderfully evocative limited edition of Douglas’s Maltese work. 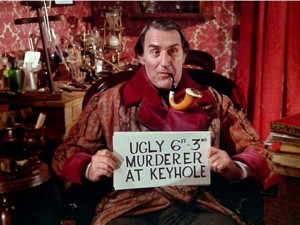 Douglas Wilmer will be remembered for his wit, his what-the-hell attitude to life, his generosity of spirit, his fund of often repeatable anecdotes and his delightful company.

The Society sends deepest sympathy to Anne Wilmer – always a pillar of loving support to Douglas – and her daughter Katharine.