You are here: Home > About the Society

Founded in 1951, the Society is open to anyone with an interest in Sherlock Holmes, Dr John H. Watson and their world. It is a literary and social Society, publishing a scholarly Journal and occasional papers, and holding meetings, dinners and excursions. 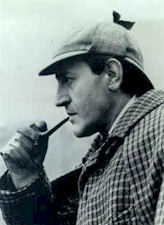 How it all began…

London , 1950. St Marylebone Borough Council was hard at work trying to decide how to celebrate the Festival of Britain the following year. The Public Libraries Committee suggested an exhibition about Sherlock Holmes. Others on the council were not impressed – 'is this character, associated with murky crime, the best we have to offer' someone demanded. Why not do something on slum clearance? Letters began appearing in The Times – from Dr Watson, Mycroft Holmes, Inspector Lestrade – seventeen of them in all. Some even said that they had some mementoes of Sherlock Holmes, and offered to lend them for exhibition. Bowed down by public opinion, the Council relented. A small group of enthusiasts got together to plan the exhibition. Eagerly they designed and collected – a Persian slipper for Holmes’s tobacco, a gasogene for Watson's soda, a jack-knife for Holmes to skewer his unanswered correspondence to the mantelpiece. On an upper floor of Abbey House, the Baker Street headquarters of Abbey National, a meticulously detailed recreation of the famous sitting room at 221B took shape. Fresh crumpets – bitten into by two different sets of teeth – were supplied every day by a local bakery. Over 54,000 people came to see it. It was a triumph.

For its creators, though, the job was over. Then they thought – why don't we resurrect the Sherlock Holmes Society? There had been a small Society in the 1930s, whose members had included such distinguished scholars as the leading cleric H R L "Dick" Sheppard, formerly of St Martin's in the Fields, and the crime writer Dorothy L Sayers. The war had brought an untimely end to its activities. On Tuesday 20 January 1951, the new society was formed – called the Sherlock Holmes Society of London to distinguish it from the pre-war ancestor from which it can nevertheless claim direct descent. The first Sherlock Holmes Journal appeared in May. It included articles on Holmes's personality and Watson's gambling habits, and a review of the films of The Hound of the Baskervilles. Its membership list included just over 130 names. There are more than 1,000 today.The Society quickly established a pattern of activities which it continues to this day – a twice-yearly journal, regular meetings, an annual dinner in January. Its tone was witty, erudite, but always with a light touch. The writer Mollie Hardwick once described the Sherlockian game as a huge family joke, and a sort of family the Society indeed is, whose skills and responsibilities are passed down the generations.

One of the Society's greatest early triumphs was the celebrated pilgrimage to Switzerland in 1968 – forty members and least twice as many Press, all in full Victorian costume. High above the Reichenbach Falls, the Society's President Lord Gore-Booth shed his mantle as head of the Diplomatic Service to become Sherlock Holmes himself, locked in the death struggle with the evil Professor Moriarty, played by leading barrister Charles Scholefield. And when the BBC made the fight at the Falls the first item in its evening news bulletin, the Society knew that it had reached a new pinnacle of success.Since then, there have been no fewer than five further pilgrimages to Switzerland. In 1993, the Society made its first visit to France. Full costume was again de rigueur as members visited Bordeaux and Cognac, concluding in Montpellier, where Holmes had spent part of his exile while all the world believed him to be dead, exactly one hundred years earlier. And in 2001, to celebrate its fiftieth birthday, the Society took a cruise in the Baltic, with visits to Oslo, Stockholm, Copenhagen, Tallinn, St Petersburg and Helsinki.Britain is not neglected in the Society's peregrinations either. Summer week-end trips have included expeditions to Dartmoor to visit the scene of The Hound of the Baskervilles, to the Peak District in the north to explore the territory of The Priory School, and to both Oxford and Cambridge. Needless to say, controversy rages in the Society as to which of these two was actually Holmes's university.

Today the Sherlock Holmes Society of London faithfully continues the tradition started by that small group of enthusiasts over forty years earlier. Interest in Sherlock Holmes world-wide remains as strong as ever, and the Society's membership embraces people from all walks of life and from every part of the globe.The Society holds regular meetings, usually in London. Members and guests gather for drinks and chat, followed by dinner for those who wish it, and then a paper or a panel discussion on some aspect of the life and work of Sherlock Holmes. Contributions from the floor are welcomed, and usually develop into a lively debate, which might well be continued in the bar afterwards. The focus for the event might be on a particular case, or on a special subject such as music, transport, food and wine, science, police work, literary influences… the possibilities are endless. Sometimes the scholarship is replaced by a novelty evening – there have been two or three mock trials, a music hall entertainment, a Mastermind and a University Challenge. There are also less formal events – pub gatherings and London walks are popular, as is the Film Evening. Each year there is either a weekend trip or a day out, visiting scenes of Holmes’s cases outside London. The Society has also instigated an annual London Weekend, with events on three or four successive days, making it worthwhile for Members from abroad or from other parts of the UK to come to and stay in the capital.The Society is open to all comers – no introduction is needed and there is no entrance examination. All that is required is an interest in Sherlock Holmes and his world, and a willingness to play the game