You are here: Home > “Sherlock” wins a BAFTA! 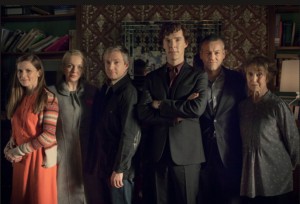 The British Academy of Film & Television Arts annual Television Awards were broadcast live this evening from the Theatre Royal, Drury Lane. We're sorry to report that Benedict Cumberbatch didn't win the best leading actor BAFTA for "Sherlock" – but not too sorry, really, because all four of the shortlisted actors were deserving, and we can't blame the Academy for choosing Jason Watkins for "The Lost Honour of Christopher Jefferies".

But we're delighted that "Sherlock" beat off some very strong competition to win the Radio Times Audience Award – the only BAFTA award voted for by the viewing public. It was accepted by Steven Moffat, Sue Vertue, Beryl Vertue and Amanda Abbington. The leading actors weren't there: as Steven explained, Martin Freeman was at home looking after the kids and Benedict Cumberbatch was looking after his pregnant wife – "because that's what real men do!"