You are here: Home > The Best of the Sherlock Holmes Journal – Volume Two 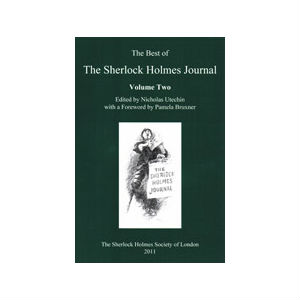 View cart “Colour it Prussian Blue” has been added to your cart.

The Society is happy to announce the publication of the long-awaited second volume of The Best of ‘The Sherlock Holmes Journal’, launched at the Society’s AGM on 19th May 2011.

Volume One appeared in 2006 and has sold out. Because that was so successful, a further twenty years worth of erudite scholarship (1969-90) – and records of Society milestones – has been prepared in a similar format, again in a strictly limited edition of 300 copies.

As for Volume One, the former Editor of the Journal, Nick Utechin, has chosen articles that show off the very best of what he and predecessors published in times past. Styles of, and attitudes to, what Dorothy Sayers called ‘the game’ have changed constantly, and this book shows how contributors adapted. Modern readers may not immediately recall the names of Harald Curjel or Vernon Goslin, but what Holmesian has not heard of Michael Harrison or Geoffrey Stavert, of Tony Howlett or Jean Conan Doyle?

It was in fact Tony Howlett who provided (in his last piece of published writing) the Foreword to Volume One of The Best of The Sherlock Holmes Journal. Pamela Bruxner – for many years an Honorary Secretary of the Society, and an Honorary Member – agreed to write the Foreword for Number Two.

There remains for some, in this second decade of the 21st century, a sense of wonder that the appeal of Mr. Sherlock Holmes is clearly undiminished. Hollywood films and BBC dramatisations help immeasurably; but for a happy few, that scholarly Sherlock Holmes ‘game’ is the fixed point. Volume Two of The Best of ‘The Sherlock Holmes Journal’ is an essential contribution in this context, and the Society is proud that it can offer it to you in this year of all years.

If you are looking to buy membership as a gift or multiple memberships, or if you experience difficulty with applying online, please contact the Membership Secretary: shsoclondon@gmail.com