You are here: Home > Podcasts

The Long Man and the Grace Chalice 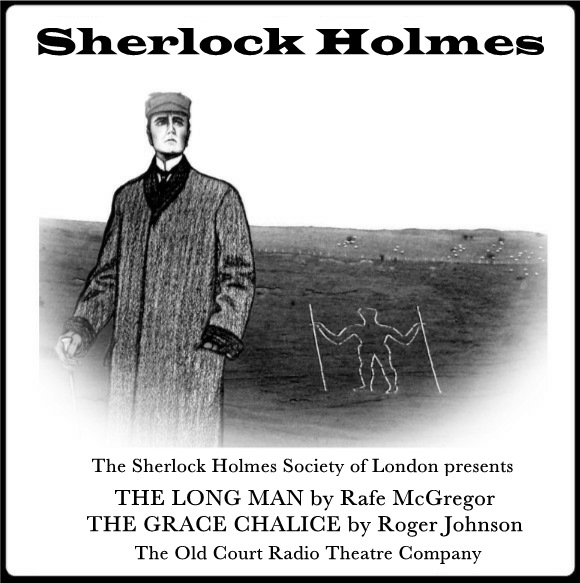 In Sir Arthur Conan Doyle’s original stories, Dr Watson drops tantalising hints about other cases of the great detective. Here we attempt to reconstruct two of these unpublished exploits.In “The Long Man”, while Holmes investigates an insurance fraud a brilliant police detective pursues a Macedonian gun-runner. Then an inoffensive archaeologist is murdered… Rafe McGregor’s story is dramatised by M J Elliott.

“The Grace Chalice” tells how Sherlock Holmes solves the mysterious theft of a priceless mediaeval cup. Roger Johnson has adapted his own story.

The plays were recorded by David Booth and John Rhodes at Pig Pen Studio for Hosiprog Productions. The producer was Roger Johnson. 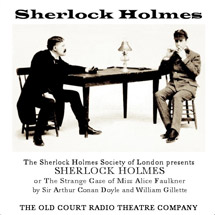 While rewriting Conan Doyle’s script, the American actor William Gillette famously asked, “May I marry Holmes?” The author replied, “You may marry or murder, or do what you like with him!” The resulting play was first staged in 1899 and has lasted for more than a century. Gillette himself recorded an abridged version in 1935, for the Lux Radio Theater. Three years later Orson Welles adapted the play as an hour-long drama for the Mercury Theater on the Air, in which he took the leading role, giving a remarkable impersonation of Gillette.The play wasn’t heard on British radio until 1953, when the classic partnership of Carleton Hobbs and Norman Shelley took the roles of Holmes and Watson in an adaptation by Raymond Raikes, with Frederick Valk as Professor Moriarty. Although two good audio productions were made in California in recent years, each with a distinguished British actor in the lead Ð Martin Jarvis and David Warner – the play hasn’t been heard on British radio since the 1950s.

The Man with the Watches

FIVE YEARS AFTER the supposed death of Sherlock Holmes at the hands of his arch-enemy Professor Moriarty, The Strand Magazine published two apparently unrelated mystery stories, each quoting an un-named criminal investigator. Devotees have long debated the identity of this person: was he Sherlock Holmes or not? In this ingenious new play, M J ELLIOTT assumes that Holmes and Watson did investigate the mysterious murder on the Rugby express.
Listen Now >> The Lost Special

FIVE YEARS AFTER the supposed death of Sherlock Holmes at the hands of his arch-enemy Professor Moriarty, The Strand Magazine published two apparently unrelated mystery stories, each quoting an un-named criminal investigator. Devotees have long debated the identity of this person: was he Sherlock Holmes or not? In this ingenious new play, M J ELLIOTT assumes that Holmes and Watson did investigate the baffling disappearance of a special train.
Listen Now >> The Gloria Scott

Sherlock Holmes told his friend Watson that the case of “The Gloria Scott” was the beginning of his career as a professional detective. It occurred during his student days, and it concerned theft, murder and blackmail.
Listen Now >> Wisteria Lodge

The complex problem of “Wisteria Lodge” gave him plenty of scope. And set him in friendly rivalry with Inspector Baynes of the Surrey Constabulary, the only police official who was unarguably his equal as a detective.
Listen Now >> The Mazarin Stone

This story comes from The Case Book of Sherlock Holmes, the last of the nine books about the great detective to be written by his creator, Sir Arthur Conan Doyle. The Mazarin Stone, being based on a stage play, The Crown Diamond.
Listen Now >> The Veiled Lodger

This story also comes from The Case Book of Sherlock Holmes. In The Veiled Lodger Homes and Watson are listeners with us to the story of a past crime – but what a story it is! Devotees will recognise elements from Conan Doyle’s apocryphal tale ‘The Field Bazaar’.
Listen Now >> The Yellow Face

Before BBC Radio 4’s dramatisation of the complete Sherlock Holmes Canon, THE YELLOW FACE had never been adapted for radio. Until now! Now this most elusive adventure is available in a witty and exciting new dramatisation by M J ELLIOTT.
Listen Now >> The Three Students

THE THREE STUDENTS was broadcast in the early 1950s on the Light Programme, in Children’s Hour, but no recordings exist. And that’s all. Until now! Now this most elusive adventure is available in a witty and exciting new dramatisation by M J ELLIOTT.
Listen Now >> The Beryl Coronet

From the first volume of Dr Watson’s chronicles, The Adventures of Sherlock Holmes, The Beryl Coronet takes Holmes and Watson into a world of high society and high finance. Not for the first time, or the last, they must deal with the indiscretions of a truly illustrious client.
Listen Now >> The Speckled Band

The Speckled Band” is an altogether darker business – a tale of madness, violence and gothic suspense. Dr Grimesby Roylott (wonderful name!) is one of the classic villains, and the story has consistently ranked among the all-time favourites since it was first published in The Strand Magazine in 1891.
Listen Now >> Shoscombe Old Place

Holmes’s investigation in the 1890’s of the events at Shoscombe Old Place – the eccentric behaviour of Sir Robert Norberton and the sinister mystery of the haunted crypt – was triumphantly successful.
Listen Now >> The Five Orange Pips

The case of ‘The Five Orange Pips’, from the late 1880s, was one of Sherlock Holmes’ rare failures: he identified the doom that stalked the Openshaw family, but could not prevent the murder of his client.
Listen Now >> All the Old Court Radio Theatre Company recordings can be listened to or downloaded free of charge.

Please make sterling cheques payable to Roger Johnson and US dollar checks to Jean Upton. Euros in cash only, please.

Orders should be sent to: