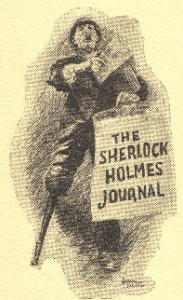 You can download the book reviews here: I Am an Omnivorous Reader

Editorial: “A Beacon of the Future”
Undershaw, the house that Arthur Conan Doyle built for himself and his family in Surrey, has come to life again as a school for youngsters with various disabilities.

Editorial Notes
Bert Coules’s investiture into the Baker Street Irregulars is celebrated with a portrait by Philip Cornell.
Sherlock Parody by The Hillywood Show is a gorgeous musical spoof. Find it at www.thehillywoodshow.com/videos/sherlock-parody.
Conan Doyle’s friend Jerome K Jerome is commemorated in his home town of Walsall.
Sixty years ago the then-Editor of this Journal was the victim of a curious robbery.
Robert Graham discovers a unique memorial to Conan Doyle in Austria.
Congratulations to The Poor Folk Upon the Moors, who celebrate their Silver Jubilee in 2016!

“The Professor and the Prime Minister” by Peter H Jacoby
Had it not been for Sherlock Holmes, Professor Moriarty could have become the eminence grise to Winston Churchill.

“Who Were the Baker Street Irregulars?” by Bonnie Stepenoff
Street urchins in fact and fiction. Holmes’s “irregulars” are “small embodiments of the human capacity to survive and even flourish in a hard and dangerous world”.

“For a Cleaner, Better, Stronger America – Vote Gibson” by Nicholas Dunn-Meynell
Could J Neil Gibson, the Gold King, have become President of the United States?

“Far Western Brookland” by Bernard Davies
Part One – all that the author completed – of an search for the real location of “Boscombe Valley”.

“Some Observations on that Cardboard Box” by Forbes Gibb
Holmes might have echoed Inspector Baynes’s remark concerning a different case: “I thought I had squeezed all the juice out of it, but I see there was a little over.”

“It Seems to Me” by Auberon Redfearn
1. The world is surely now prepared for the story of the Giant Rat of Sumatra. 2. The Sign of Four complete in four stanzas.

“An Unexpected Visitor”
Was “Captain Croker” an impostor?

“‘Don’t Go to the Dark Side’ – A Weekend at Christ’s College, Cambridge, 2-4 September” by Roger Johnson
On Friday evening Cambridge historian Mike Petty spoke about Conan Doyle’s (and Sherlock Holmes’s) connections with the city. Auberon Redfearn examined the “controversity”, and David Bentata and Guy Marriott debated the perpetual question: was Holmes an Oxonian or a Cantabrigian?
On Saturday morning, after Jonathan McCafferty’s introduction to Holmesian sites in Cambridge, we were split into groups, each to visit a different one of three outstanding college libraries. In the afternoon Professor John Hughes delivered the Professor James Moriarty Memorial Lecture, his subject being the effect of certain drugs on the brain. And at the Professor Moriarty Reconciliation Dinner we were treated to a lighter but no less engrossing talk on Sherlock Holmes and the French connection by Professor Michael Moriarty (no relation, honest).
Sunday began with a coach tour of the villages visited by Holmes in “The Missing Three-Quarter”. The last event was lunch, at which we were joined by our former President and now Honorary Member, Freda, whose birthday fell that weekend.

“‘A Capital Return’ – The London Mini-Festival, 19th-22nd May”
On Thursday the formal business of the Annual General Meeting preceded a witty and baffling display of magic by Ian Keable.
Lord Horam was our sponsor for afternoon tea at the House of Lords on Friday. In the evening we met at the Strand Palace Hotel, where Geraldine Beare spoke about the legendary Strand Magazine, in whose pages the shorter adventures of Sherlock Holmes first appeared 125 years ago.
Saturday’s event was a visit to the British Museum to study Chinese ceramics.
On Sunday Roger Johnson conducted a Holmesian tour of Lambeth, aboard a vintage Regal IV bus.