You are here: Home > Conan Doyle

Arthur Conan Doyle was born on 22 May 1859 at Picardy Place, Edinburgh, the son of Charles Altamont Doyle, a civil servant in the Edinburgh Office of Works, and Mary (Foley) Doyle. His father suffered from epilepsy and alcoholism and was institutionalised. He died in an asylum in 1893. Doyle's mother kept a boarding house.Doyle was educated in Jesuit schools and later studied at Edinburgh University, qualifying as a doctor in 1885. After graduation Doyle practiced medicine until 1891, when he became a full time writer. Creativity was apparent in Doyle's ancestry: his grandfather was a famous caricaturist and his uncle was a well-known illustrator. Doyle's father was an architect, designer and book illustrator. Doyle himself was an admirer of Edgar Allan Poe and Emile Gaboriau.In developing his own literary character, Doyle based Sherlock Holmes on Doctor Joseph Bell, a surgeon and teacher he had studied with while attending Edinburgh University. Dr. Bell had the uncanny ability to reveal a patient's symptoms, diagnose patients and report on their origins before they would speak a word to him about their afflictions. Sir Henry Littlejohn, who taught forensic medicine to Doyle also made a large impression and contributed to the development of Holmes' character.As far as Holmes' name, his last name may have been based on American jurist and fellow doctor Oliver Wendell Holmes and his first name may have come from Alfred Sherlock, a prominent violinist of his time. Dr. John Watson, a fellow Southsea doctor and Portsmouth Literary and Scientific Society member who served time in Manchuria, received the honour of having Holmes' partner named for him.Doyle worked backwards from the solution of a case to create his stories. A Study in Scarlet was his first story and novel and introduced the characters of Holmes and Watson and included how they met. Watson, on leave due to injury sustained during the second Afghan War, returns to London without friends or relatives in town. He exhausts his savings and is made aware of someone looking to share lodgings. The gentleman, Sherlock Holmes, identifies himself as a consulting detective often contacted by the police inspectors Lestrade and Gregson to assist in cases.A Study in Scarlet was written in three weeks in 1886 and published in 1887. The second Sherlock Holmes story, The Sign of the Four, was written for the Lippincott's Magazine and the later stories appeared in the Strand Magazine. By 1893 Doyle had tired of Holmes and killed him off in the The Final Problem. In the story Holmes meets Moriarty at the fall of the Reichenbach in Switzerland and disappears. Nevertheless, public demand and a lucrative income brought the return of Holmes, with stories appearing until 1927.The characteristics that make Holmes attractive to readers: his integrity, trustworthiness, sensibility, rational decisiveness, lack of emotionalism, and intellectual superiority are measured and reported by Watson. Watson (a doctor like Doyle), brings humanity to Holmes, who without Watson's sympathetic telling, would come off cold, inaccessible and unpleasant. "It may be that you are not yourself luminous," Holmes tells Watson, "but you are a conductor of light. Some people without possessing genius have a remarkable power of stimulating it." 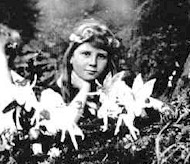 His first wife, Louise Hawkins, whom he had married in 1884, died in 1906, and he married Jean Leckie in 1907. In 1900 and 1906 he ran unsuccessfully for Parliament and was knighted in 1902. After the death of his son, Kingsley, in World War I he turned to spiritualistic studies and the occult (see The Cottingley Fairies for more on this aspect of his life). He became president of several spiritualist organizations.Doyle died on July 7th, 1930 from heart disease at his home; Windlesham, in the town of Crowborough in East Sussex Conan Doyle's other publications include non-fiction, plays, verse, memoirs, short stories, and several historical novels and supernatural and speculative fiction. The Lost World is perhaps the best known of his other fictional works.

Sir Arthur Conan Doyle on film The only sound film ever made of Arthur Conan Doyle. Originally part of an early Movietone sound reel, it was also used as part of the presentation of Basil Rathbone's Hound of the Baskervilles in 1975. It was reconstructed by Blackhawk Films in 1974 and recently reissued on DVD. Synopsis: "He relates how, in 1886, he came to write the Sherlock Holmes stories, and for five minutes he gives a rich and humorous history of his scientific detective in a warm Scotch burr. But even dearer to Doyle than Holmes was his belief in the afterlife, and in the last half of the film the famous author discusses the psychic faith for which he endured such hostility and to which he was so deeply committed." (Blackhawk Films)Sir Arthur Conan Doyle Fox-Case Movietone, 1929. 11½ minutes. Producer – Jack Connolly, Photographer – Ben Miggins, Sound: Harry Squires, D. F. Whiting, Harry Kaw

Parker Duofold from the year 1921. Arthur Conan Doyle wrote stories of Sherlock Holmes with this type of pen. (Thanks to Russ Stutler for this)